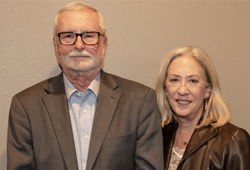 A group of North Dakota State University students gathered around John and Susan Wold during homecoming week, eager to share their stories about studying abroad and to thank the Wolds for helping make their international experiences possible.

"It's a life-changing experience," said Ciara Houser, a senior Spanish major who plans to attend dental school after graduating in May. "Studying abroad forces you out of your comfort zone and really opens your eyes to other perspectives and cultures."

Houser said the John and Susan Wold International Study Endowment Fund afforded her the opportunity to spend 17 weeks in Costa Rica where she immersed herself in Spanish classes and completed a dental internship.

"I am extremely grateful for the scholarship because it really helped to ease the financial burden of studying abroad," Houser said. "Because of my experience in Costa Rica, I have incorporated mission work as a dentist in my professional goals."

Wold, a Fargo native and 1966 NDSU pharmacy graduate, said he and his wife established the endowment because study abroad opportunities foster academic development, personal growth and cultural understanding that are critical in today's global marketplace. Since creating the endowment in 2005, the Wolds have helped fund the international studies of 37 NDSU students.

"It's great to visit with them and hear about their experiences," John Wold said. "Their study abroad has clearly had an impact on them and they're all going to go on to do great things."

The Wolds created a charitable remainder unitrust to fund their international study endowment as well as an endowment in support of NDSU's College of Pharmacy. The trust provides the Wolds annual income, but will ultimately be dedicated to supporting their endowments. The Wolds have also chosen to make additional cash contributions to the international study endowment and to utilize a charitable match provided by John's longtime employer, pharmaceutical giant Eli Lilly and Company, so they could immediately begin to see the impact on students' education.

"It's extremely satisfying to see how enthused these students are about their opportunities to study abroad and to grow as individuals," Wold said.

The Wolds have also donated to NDSU athletics and have helped fund improvements to Sudro Hall, home of the College of Pharmacy. John also gives his time, serving as a trustee of the NDSU Foundation and Alumni Association.

After graduating from NDSU, Wold earned a Master of Science degree and a Doctor of Philosophy, both in pharmacology, at the University of Iowa. He completed a postdoctoral research fellowship at London's St. Mary's Hospital Medical School before embarking on a successful career with Eli Lilly and Company. Wold steadily rose through Eli Lilly's executive leadership before he retired as vice president of research acquisitions in 2000.

Ciara Houser and Tyler Toepke-Floyd were among a group of NDSU students who met with the Wolds during homecoming to share their study abroad experiences and to express their gratitude.

"It really made a big difference in my education and in my overall growth," said Toepke-Floyd, a mechanical engineering student who studied in Chile during the 2016 spring semester. "Pursuing part of my education in a foreign country wasn't easy, but it was well worth it.

"I think what the Wolds are doing is amazing and we're all very grateful for their support," he said. "They understand why it's so important for students to take the jump and gain these kinds of experiences."