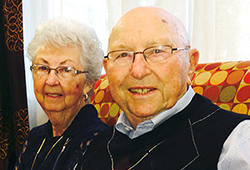 Don Anderson, BA '53, MA '57, grew up on a farm in Dickey County and attended school in Fullerton, North Dakota. Jo also has a farm background and grew up in Ellendale, North Dakota. The two met shortly after Don finished his undergraduate degree at NDSU in agricultural economics. He went on to earn his master's degree in ag econ from NDSU and his doctorate at the University of Minnesota.

When Don and Jo wanted considered where they could make an impact at NDSU, the answer was simple. Aside from two years in the military, the College of Agriculture, Food Systems, and Natural Resources was Don's home for his entire professional career as a teacher, researcher and administrator. The only thing left to figure out was a need in the department that they wanted to support. After visiting with some former colleagues, Don determined that creating a graduate fellowship endowment would be extremely helpful in recruiting master's degree students from other programs.

Don and Jo established the Dr. Donald and Joanne Anderson Graduate Fellowship Endowment. They've made gifts to the fund for several years but wanted to ensure the fund continues to make maximum impact, so they asked the NDSU Foundation and Alumni Association about the best way to accomplish this. They determined it would be simple and efficient to include the NDSU Foundation and Alumni Association as a beneficiary of a retirement account. By working with the Foundation on a Statement of Intent, which provides the language necessary to document how the proceeds of the gift are to be directed, Don and Jo can be certain their generous gift is properly established and will be used as they intended.

"The College of Agriculture was my home for 40 years," Don said. "NDSU has had a major impact on me and my family. Three of my sons graduated from NDSU and my daughter attended here for several years before completing her degree at Minnesota State University Moorhead. I feel a strong need to give back to the institution that has positively influenced the career paths of my entire family. With the guidance of the Foundation staff, Jo and I have been able to accomplish our impact goals."