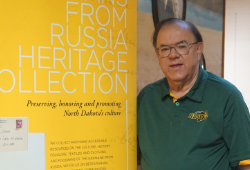 "When family members and researchers prepare a family history, it's much more than names and dates," Miller said. "They need to know about the background. What were the foods that they ate? What kind of medicine did they have? What was the culture like? Where did they come from? That's what we can provide. That's what we're strong in, and that's our focus with the archives and our website."

Miller wants to ensure his legacy, so he worked with the NDSU Foundation and Alumni Association to establish an endowment to benefit the Germans from Russia Heritage Collection by designating the NDSU Foundation as beneficiary of his IRA. Miller's gift is an example of one of the simplest and most effective ways for donors to support the university through their estate plan. The endowment will fund staffing for future projects dedicated to collecting stories about Germans from Russia who live in North Dakota.

"There's a quote in German that translates to 'work makes life enjoyable,'" Miller said of North Dakota's ancestors. "We're the beneficiaries of all the hard work - they were very hard working."

Through storytelling via numerous platforms including oral interviews, published texts, records of family histories, photography and documentaries, the Germans from Russia Heritage Collection showcases the complexities and challenges of these immigrants.

"The reason they left Russia - or Ukraine, today - was because there were certain promises made to them that were never kept. One of them was that they would never have to serve in the military, and then that all changed," Miller said. "In the late 1800s, the language was changed from German to Russian. But not all of them came. A small percentage came, and those who decided to stay suffered the Stalin-era during the 1930s and World War II. It's important that future generations know where their ancestors come from."

"These documentaries have enriched the story and heritage and culture of the Germans from Russia community," Miller said.

Since the mid-1990s, Miller continues to lead the Journey to the Homeland Tours to Germany and Ukraine for those with German-Russian heritage to visit the ancestral villages near Odessa on the Black Sea. Through understanding the journey of those who came before them, people today are better able to connect to themselves. By providing resources for people to uncover the past, Miller said NDSU is forging connections through past and present.

"NDSU is a land grant university and it's for its people and its heritage, so this fits very well. That's one of the reasons I think this collection is so important here. I don't think there's any collection regionally, probably even nationally, that does so many unique things for heritage and culture at a university library setting. This may be unique in the United States and Canada. They have collections but not at this level - in doing documentaries and doing homeland tours. All of those things are important not only for developing donors but developing history and culture," Miller said. "I'm hoping that as a legacy, my gift will inspire other people with a deep passion for their ethnic roots to give to NDSU."